Well, not that long ago I showed you that a hoop-frame greenhouse could survive a Canadian winter. I should probably add “so far” to the end of that statement. We had a whole pile of snow (by central Alberta standards) over the past two days and I was away and thus unable to brush off the snow that was piling up on my greenhouse. So I was a little worried when I looked out this morning and saw my greenhouse looking like this. 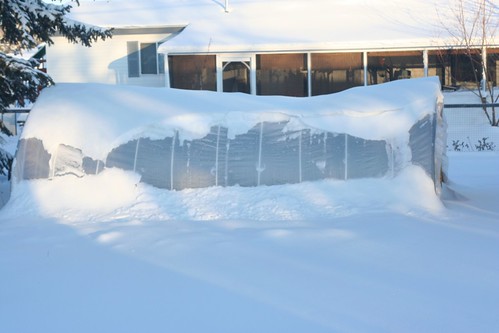 The snow had accumulated on the top enough to start bending the pvc pipes and the roof began sinking. This is what it looked like inside. 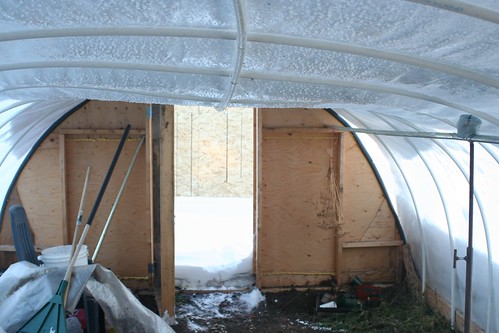 On one hand, I was sad to see it getting squashed by the snow like that. But on the other hand, I was over joyed to see that although it had bent, nothing had broken! Everything was intact – just a little bent out of shape. So here’s another positive for using PVC pipe. It can bend quite a bit, still not break, and then resume it’s shape again when the pressure is off.

So I took out my shovel and scraped the snow back from the sides and brushed the snow off of the roof best I could. Some chunks were frozen to the plastic at the top, and I didn’t want to risk wrecking the plastic, so I left some up there. But the warm weather that will come eventually, hopefully, should melt that away.

While there certainly are some risks to this type of greenhouse structure (after all, I do live in Canada), and we’re not out of the woods yet (still six more months of winter… well, three at least), I still stand behind my PVC pipe greenhouse.