This is my third season of growing tomatoes, and believe me, I have learned a lot in three years. But perhaps one of my greatest sources of knowledge came from a Hydroponic Tomato Growers Workshop that I attended last spring in California. This workshop was geared towards people who were considering starting their own greenhouse tomato business. This was a HUGE source of information for me! There were so many things that I wasn’t doing, and so many things that I was doing in the wrong way. So, from my experience and from what I learned at that workshop, here are are Seven Essentials to Growing Tomatoes. 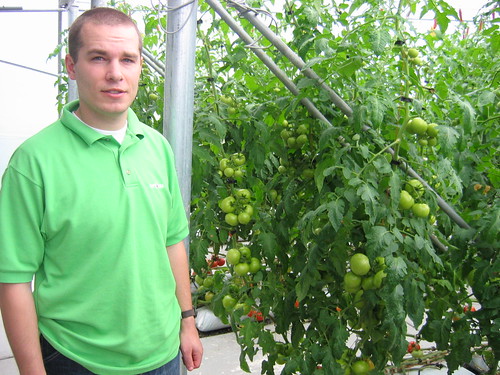 Ok, you probably knew this one. In Canada our growing season is so short, not only due to the cold, but also due to our limited sunlight hours in the winter. We do have enough sunlight to grow foliage (like lettuce and the like), but we don’t get enough sunlight to produce fruit until about March. So if you have a sunny south window (or artificial lighting), start your tomato plants in late February/early March. That should give you a well established plant to transplant into your greenhouse. Read more about transplanting tomatoes…

#2. Grow Tomatoes in a Greenhouse

You know, tomatoes can be grown in the great outdoors, but they will be one or two months behind those that are in a greenhouse. I’m not sure how many frost-free days you have in your specific area, but you probably don’t want to lose two months of them.

So build a little greenhouse. It doesn’t have to be huge, although you can build a good sized greenhouse for little money as this article explains. Otherwise, Alberta’s weather may greatly hamper your bumper crop.

This can be said for lots of things. But especially tomatoes. They are such little plants when you transplant them, it’s easy to forget what a jungle they will grow to be in a couple of months. I did it. (twice) My mother-in-law did it. But don’t do it.

Tomatoes need proper air circulation, not to mention that pruning a jungle is difficult. The exact spacing will vary with variety, but as a general rule, put at least two feet between plants.

A good layer of straw mulch will help in a couple of ways. First of all, it’ll suppress the weeds. (That alone is worth it.) Secondly, it’ll keep the soil moist. Tomatoes are heavy drinkers and need a lot of water. A drip irrigation system coupled with a good thick mulch will make sure your tomatoes get the water they need. Just be sure not to over water – that’s what causes your tomatoes to split.

This is the one that often gets missed. Some people believe that the more leaves the plant has, the more energy the plant will receive. THIS IS NOT TRUE. Yes, plants do need some leaves, but too many leaves will actually drain energy away from the plant. All the water and nutrients that the roots soak up must be distributed to those extra leaves, instead of the fruit. So here’s what you need to do.

First, eliminate all suckers. Suckers are the little shoots that appear in the elbow between the stem and a branch. Just bend it over and it will snap right off. 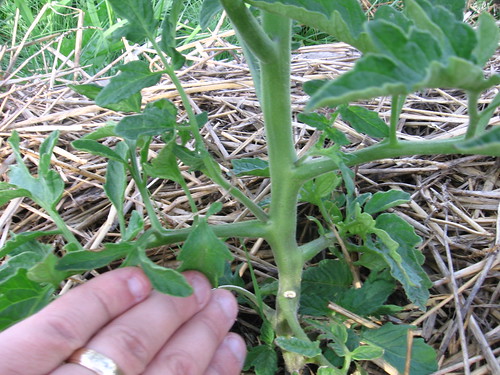 Secondly, remove any branches that are brown or wilting at the bottom. These do your plant no good. Get rid of them. For these, grasp the stem firmly in your hand and push the branch down with your thumb – it will snap off at its natural breaking point.

Note: For all tomato pruning, avoid cutting them off with a knife or other tools. Snapping them out with your fingers is very easy and the wound caused by breaking heals quickly. A cut is more likely to allow disease to enter.

#6. Pick BEFORE Tomatoes Are Ripe

This is another one that sounds crazy. Popular belief would have you “vine-ripen” your tomatoes. Surely they are sweeter, tastier, and probably better for you…. NONSENSE.

The fact is, by the time the tomato just starts to turn color (that slight greeny-orange color), it already has all of it’s goodness in it. And it’s actually the seeds inside that make the tomato ripen. As the seeds release ethylene (the gas applied to green bananas to make them turn yellow), the tomato ripens.

Don’t get this confused with the tomatoes in the store that are picked green and sprayed with ethylene – these are picked too early and do NOT have all the goodness inside yet.

So why not let them stay on the vine? A plant’s job is to reproduce itself. If the plant thinks it has successfully produced fruit, it will begin to shut down and produce less. But if you take the fruit away before it sends the “Mission Accomplished” signal to the plant, the vine will continue to pour it’s energy into producing fruit. (I hope I didn’t get too scientific for you there…)

Store tomatoes at room temperature. Never refrigerate. Temperatures below 12° for even a half an hour will begin to destroy the flavor. They may keep longer, but the amazing flavor that comes from a home-grown tomato will be lost.

So there you have it – not a comprehensive list by any means, but it’ll certainly get you on your way to growing delicious tomatoes in your own backyard. If you know of any other essentials to growing tomatoes, feel free to leave your comments!