Some of the most popular articles that I’ve written on this website have been about my inexpensive greenhouses. From my Giant 24’x48′ A-Frame to my hail-proof PVC hoop-style greenhouse, I’ve explored all kinds of options for how to keep my garden safe from the harsh Alberta climate. And while most of my ideas are functional solutions – I can’t say they are always beautiful solutions. Rough cut lumber covered by a plastic sheet does keep the tomatoes from freezing, but it may not enhance the overall look of your yard. And in many cases, that’s ok. A hoop-frame greenhouse out behind the barn on the farm fits in nicely, but it might look out of place in your beautifully landscaped city yard.

So if you’re looking for a more attractive way to extend your growing season, you may want to consider a Victorian greenhouse. These beautiful glass structures are not only functional, but they also add character to your garden and value to your home. When I was making the landscaping plan for my backyard, this is type of greenhouse that I designed for.

Search through several Grow Lights and other necessities for your greenhouse all at an affordable price!

Ideally, I’d like a fully heated, cedar-frame glass greenhouse – about 12′ x 30′. (My current hoop-frame is 12′ x 20′.) It would be great to start my own annuals out there (instead of in my basement like I currently do). And it would be nice to have my greenhouse as a key feature of my garden, rather than something to be hidden in the back corner.    Of course, I’ve been doing my landscaping in phases, (doing small projects as the budget allows) and so that type of greenhouse is still a few years away – but that’s the goal.

Until then I’ll be happy to keep on growing in my inexpensive hoop-style greenhouse and be just slightly envious of those of you who enjoy your beautiful glass greenhouses.

Are you one of the lucky people to have a Victorian greenhouse? I’d love to see your pictures! Feel free to attach them to your comments below!

The next step in landscaping our yard was removing the four large stumps from what would soon become the garden. We had two maple stumps and two poplar stumps. So we rented a stump grinder (to the tune of $160) and went to work. And boy, oh boy, was it ever work! The stump grinder worked great, but it sure took a lot of muscle, a lot of time, and a lot of dirt in the face.If you’ve never used one before – imagine it as a cross between a chainsaw and a rototiller. 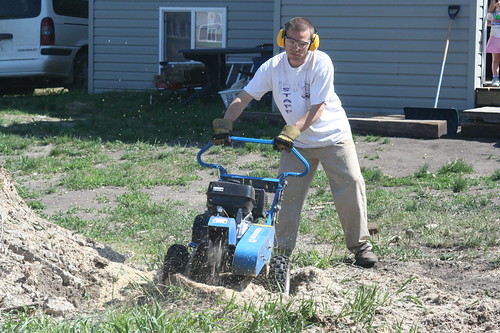 My brother-in-law was kind enough to help and so we were able to take turns running the machine. All said and done it took an average of a little over one hour per stump. Oh, and of course, the handle on the pull cord broke off, so we had to…. [things that our rental agreement said not to do…], but my neighbor is a small engine mechanic so he saved the day and another $160 for us!

Now with the stumps gone, four holes in the ground, and a whole pile of mulch – it’s time to move some dirt around. Who knows – I may just get a late garden in after all!

Last summer I bought a new house – as I’ve eluded to in some of my recent comments (and as evidenced my my lack of new posts since last August). The house had just been moved in and placed on a new basement, so there had been no landscaping done after the excavation and most of the back yard was still in it’s undisturbed state (as it had been for the past… 50 – 100 years?) There were a few rotting trees that were eager to fall on the power lines, so we decided it best to remove them even though it left us with a pretty bare yard.

We wanted to live in the house for a while before we made landscaping plans so we would know what exactly we wanted, so we didn’t do much in the way of landscaping last fall, except for removing the previously mentioned trees. Of course, with no garden I really didn’t have much to write about, so that’s why I’ve been a little absent (though I’ve enjoyed replying to your comments on my other articles).

But here’s the good news… I’m back! Over the winter I drew up a concept plan for our yard (seen a little further on in this article) and we are now working to making it all happen. Hopefully, as I keep you updated on my progress, you’ll see some dramatic changes. So to fully appreciate the before and after, here are a couple of before pictures:

This is in April, scraping back the black dirt… (Looking out from my back steps) 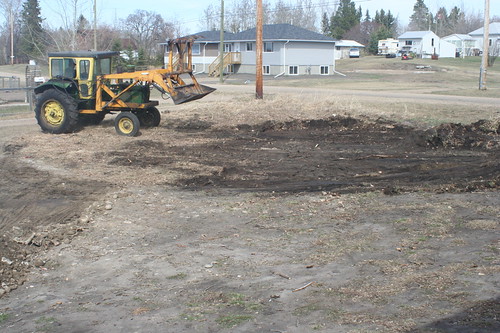 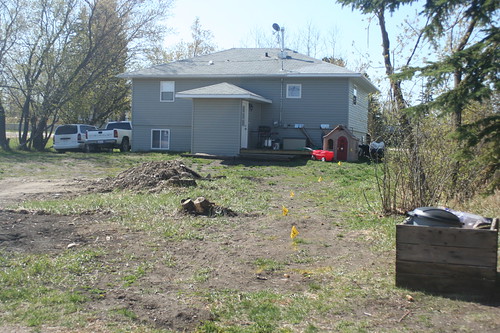 So it’s a pretty empty slate, but with lots of possibilities. Here’s what I plan to do with it: 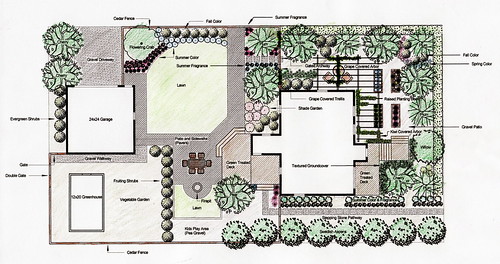 I’m going to be a bit late planting in the garden this year, but that & the greenhouse are my #1 priority. (Hey, you might get another tutorial on how to build a greenhouse.) But that’s for another day!